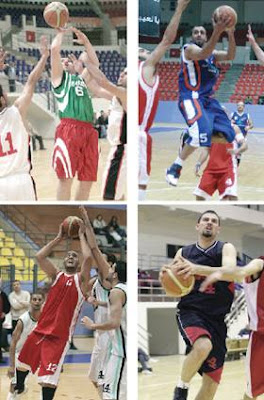 At Five oclock in the everning today the Premier League will start with the meetings of ASU and Wehdat in the lounge Prince Hamzah Hussein Youth City, followed by meeting of Riyadi and Orthodoxi at seven oclock.

League which will be held is sponsored by Medrar Company under the supervision of the Union of the game during the period from March 26 till April 16 with four teams.

the second round (semi-final), which combines the first of the first round with the fourth of first round and the second of first round with the third of the first round, according to their two mettings it will determine the finalists of them in accordance with the points they collect at both meetings as for the final round, it will determined a three meetings, the team which will get two victories first, will crowned The title. The third place will be limited with two matches with only taking into account who will record more than his rival will win bronze medal

Before the meetings today, there will be a concert and mini basket meetings between Riyadi and Orthodoxi players. ASU will seek today to prove its technical capacity that qualify to write his name among the Champions League for the first time where Wehdat will not accept to be up for grabs having left a lot of talent who is currently in the side playing with the National Team. Riyadi and Orthodoxi meeting will be a chance for the teams to show that the young talents have gained a lot of experience and benefit from running tournaments during the league stop.

ASU has the advantage of the existing of Wesam Al Sous for the game industry, as well as veteran Ghazi Naber, Fadi Saqqa . On the sides, Nedal Sharif, Luay Najjar, Eyad Abdeen,Ahmad Hamarsheh, Ali Zubi. Under the basket stands the giants Islam Abbas and Abdallah Abu Qura, together with Fadi Awad. The Team misses the existing of Zaid Abbas who is playing in Chinese Super League.

Tip of the Week

How well do you handle losing? The answer to this question might say a lot about your chances of becoming a super-star basketball player. If you pout and make excuses you aren’t going to accomplish much. You need to treat losing as an opportunity to learn and improve. Be humble but yet never lose the competitive fire, just use it positively by making yourself better.
Basketball Tips & Coaching Information From Hoop Skills